2015 Summer Universiade will be held in Gwangju, Korea 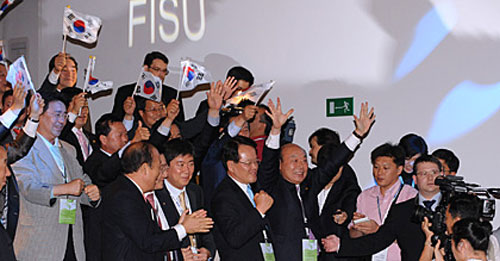 Brussels – May 23rd, 2009 – Today, the second day of the FISU Executive Committee Meeting, was dedicated to the attribution of the Universiades for 2015.
Representatives of the EC have been visiting the bidding cities from April through May and made an extensive evaluation report of all candidates which the chairs of both Evaluation Committees – Leonz Eder (SUI) for Winter and Stefan Bergh (SWE) for Summer – presented before each presentation of the bid cities. During the EC Meeting in Brussels, the bidding candidates were given space in the Hotel Lobby to erect a promotional booth and at the last day of the EC Meeting, each candidate was granted one hour to give a final presentation of their city.
The candidates for the 2015 Winter Universiade were:
Granada, Spain
The candidates for the 2015 Summer Universiade were:
Edmonton, Canada
Gwangju, Korea
Taipei City, Chinese Taipei
The authorities presenting Granada were the Mayor of Granada José Torres, the Rector of the University of Granada, Francisco Gonzalez; representative of the Council of Andalucia, Martin Soler; the Representative of the Government Antonio Martinez; Marta Carranza (CSD), Maria José Rienda (RFEDI); Eduardo Roldan (RFEDI); Frank Gonzalez (FDEH); Francisco Barranco (GR2015); Eduardo Valenzuela (GR2015).
With the legendary Sierra Nevada mountain range as the focus of the Bid Committee’s presentation, the Spanish stressed the importance of bringing the Winter Universiade to Granada to develop the ice sports in the south of Spain. ‘With only 18 ice rinks in the whole of Spain there is a lot room of growth for the ice sports in our country, Frank Gonzales, Vice President of the Spanish Ice Sports Federation and member of the IIHF Executive Board said. ‘By building two permanent ice rinks in Granada, ice hockey, skating and curling can start to grow in Andalucia. It will be a great legacy.’
With only one candidate for the WU, the Bidding City was pretty confident to land the 2015 Games. More stress and lots of tension could be observed during the afternoon session as the three candidate cities were reviewed.
After a draw for the presentation order, Gwangju headed out first to the arena. Kim Chong Yang, President of the Korea University Sports Board introduced the highest authorities present for Candidate City Gwangju, i.e. Vice-Minister of Culture, Sports and Tourism, Kim Dae-ki; Mayor of Gwangju, Park Kwang-tea; Chair of the Bidding Committee, Chung Eui-hwa; Vice-Mayor of Gwangju, Kim Yoon-suk; President of Asiana Airlines Yoon Young-doo, AUSF Senior Vice-President Chung Tong-gu and KUSB Vice-President You Byung-jin.
The credo of the Gwangju Universiade was ‘Challenge for the Best’, the best venues, the best management and the best legacy for the best Universiade. With an impressive legacy program, such as funding for a Sports Event Management System, a FISU-UNESCO program and a Universiade Sponsorship program with Dentsu, the Korean candidate promised to be a strong contender.
The Koreans ended their presentation with a message of the country’s President Lee Myung-bak who met the Evaluation Committee members earlier on their Evaluation tour.
Next in line was the candidate of Chinese Taipei, Taipei City. Present on stage during their one-hour presentation were Tai Hsia-Ling, Minister of Sports Affairs; Wu Ching-Ji, Deputy Mayor of Taipei City; Pao Chia-Chu, President of Chang Gung University; Huang Chen-Hsing, Professor of the National Chung-Cheng University; Chen Kun-Ning and Lin Shih-Ling, President and Vice-President of the Chinese Taipei University Sport Federation
The Taipei candidates started with a videotaped message of Mr. Ma, the President of Chinese Taipei who also met the Evaluation Committee members earlier on their Evaluation tour. Dr. Emile Sheng outlined the strongholds of the Taipei bid which was illustrated by a video film. ‘We see sports as a catalyst for the development of our people. It is essential to our growth and it’s part of our continuing journey to realize our greatest potential’, the Taipei official said.
Last Candidate to present its bid was Canadian city Edmonton. Present for Edmonton were Gary Lunn, Minister of State for Sport; Cindy Ady, Minister of Tourism, Park & Recreation; Indira Samarsekara, President of the University of Alberta; Stephen Mandel, Mayor of Edmonton; President of the Bid Committee Eric P. Newell; Mike Mahon and Al Maurer, both Vice-Presidents of the Bid Committee; Richard White, Chairman CIS.
After presentation of the Canadian Authorities by the Bid Committee President, the floor was given to the Master of Ceremony to lead the FISU EC members through the presentation. The MC was nobody less than former Universiade and Olympic Swimming Champion Alex Baumann who delivered an emotional plea recalling his participation and medal winning performance at the 1983 Universiade in … Edmonton. However, it was 12-year old rhythmic gymnast Hannah Parry who stole the hearts of everybody present in the room with her stunning performance.
Then, after deliberation of the Board, FISU President George E. Killian (USA) announced the winners of the 2015 Universiades.
The 27th Winter Universiade has been attributed to Granada, Spain.
‘Granada and the Sierra Nevada is a well known snow sports area’, Eduardo Valenzuela, Bid Director said. ‘Thanks to the Winter Universiade we will be able to start developing the ice sports as well. This will make the region a complete winter sport hotbed.’
The 28th Summer Universiade has been attributed to Gwangju, Korea.
‘Many civilians walked 2,015 steps every day in support for the bid while more than 150,000 citizens have volunteered to help promote the bid’, Mayor Park said. Our citizens will be ecstatic. We will host the best Games.’
‘I’m happy that FISU has the opportunity to go back to Spain for the Winter Universiade, FISU President Killian said. We’ve been in Spain twice before and we know they will do a good job. With the choice of a Summer Candidate it was more difficult. We had three excellent candidates who spent a lot of time and energy in preparing their bids. Unfortunately, there can be only one winner.’

2015 Summer Universiade will be held in Gwangju, Korea