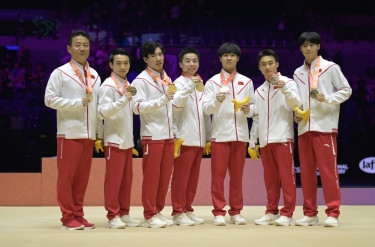 Liverpool had seen the arrival of the World Gymnastics Championships to the city’s M&S Bank Arena this week. 75 different countries and their greatest athletes competed against one another for nine action-packed days of world class competition. including more than two dozen World and Olympic medalists.

The President of the Asian Gymnastics’ Union, MR, Abdul Rahman Al-Shathri, congratulated all teams and athletes for their great achievements and proven merit. “AGU is ready to provide all support to all federations under our umbrella.” Al-Shathri added

The Chinese — Sun Wei, Yang Jiaxing, You Hao, Zhang Boheng and Zou Jingyuan — were able to put a rotten qualification day behind them as they eclipsed Japan and Great Britain for their 10th consecutive team medal at the World Championships and first title since 2018.

With 20 World team medals, 13 of them gold, China is the most successful men’s team in Gymnastics history. It holds more than double the number of team titles as Japan, which won five in a row between 1962 and 1978.