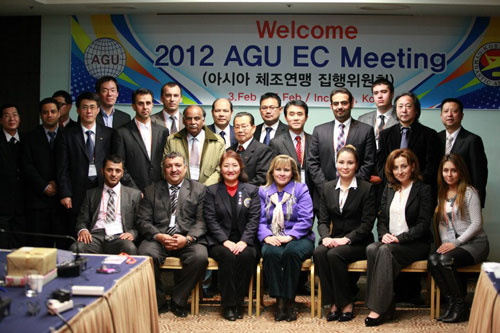 AGU office, Doha (QAT) February 12, 2012: The Executive Committee meeting was organized in Incheon / South Korea the capital of the next Asian Games 2014, All the members was present at the meeting which was the most important meeting of this period with big number of decisions. AGU was surprised with the wonderful hospitality and a successful organization of the meeting by the Korean Gymnastic Association.
Saturday 04th February 2012 was a long day for AGU with a 3 important meetings as following:

I. Presidential Commission Meeting
1. According to AGU statutes Art. 52.1 which the President of the AGU nominates the Secretary General from the same country of him and should be approved by Executive Committee; Mr. A-Rahman Al-Shathri present to the members the new Secretary General Mr. Mohamed Saeed who was present in the meeting after the resign of Mr. Mohamed Al-Naimi Ex-Secretary General for his busy schedule of his new work and the presidential commission approve to submit the nomination to the EC.
2. The presidential commission meeting approved the EC meeting agenda.
3. suggest the following rules to get the orgainisation of one event of AGU development project which are:
a. The Priority should be given for the countries which did not host course last year.
b. The Priority should be given for the country which will host AGU championships.
c. The Priority will be given for countries which have good facilities and arrangements
4. Approve to submit the proposal of EuroTramp company as AGU Partnership to AGU EC Meeting for discussing.
5.  Approve to suggest EC to add rules to the AGU statutes regarding the successor of the President to take his duties in case of his absence during the meeting and suggest the Successor will be the President of the Zone President in which the meeting is being held. 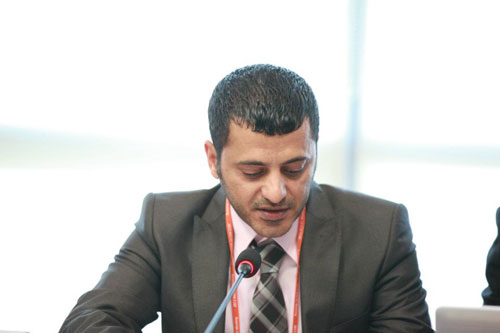 II. Meeting with IAGOC 2014 (Incheon Asian Games Organizing Committee 2014)
With the Presence of many important person from IAGOC such us:
– Mr. Kook, Youn Ju – Vice President of IAGOC
– Mr. Yang, Eui Mo – Director General of sports headquarter
– The Director of sport department
– Representatives from Korean Gymnastics Federation such as:
• Jeong Ho, SOH – Secretary General
• Mr. Dae Won KIM – AGU EC Member
AGU representatives:
– Mr. A-Rahman Al-Shathri – President of AGU
– Mr. Mohamed Saeed – Secretary General of AGU
– Mr. Anis Saoud – AGU Technical Manager
IAGOC gives a games overview by a projection concerning the 17th Asian Games Incheon 2014 which will be held during September 19 to October 04; 2014 (16 days) in the location of Incheon Metropolitan City with a 36 sports in the programme with 437 events which including 28 Olympic Sports and 8 Non-Olympic Sports. They represent an overview of the competition venue layout of different sports and the athletes and media village and finally the gymnastics schedule and the number of the judges invited.
AGU propose a collaboration between IAGOC and AGU for different aspect concerning the preparation of the event and assistant for the technical matters concerning gymnastics events.

The EC members approved unanimously the following:
– EC meeting agenda.
– Give to the following Federations that have not paid their fees a chance to pay their debt before February 2012: MAC – MYA and KGZ.
– The 2011 accounts.
– The budget of the year 2012.
– The report of AGU Development Project 2011.
– The Proposed schedule of the AGU Development Project 2012 and the designation host federations.
– Proposal distribution of Sponsoring Gymnastics Equipments from Janssen-Fritsen company. 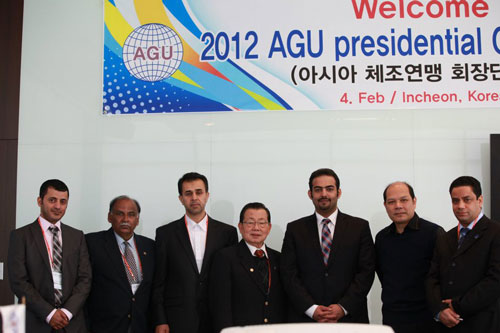