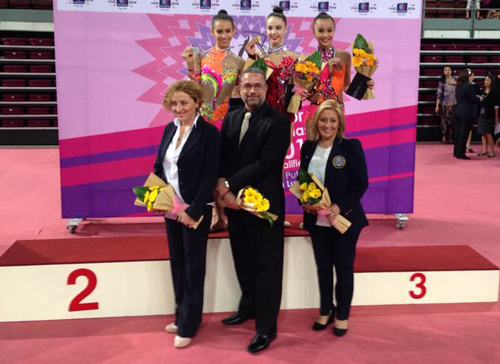 AGU Office, Doha (QAT) February 23, 2014: The All-Around Final of the 13th Junior RG Asian Championships held on February 23, 2014 in the Stadium Putra National Sports Complex with the success of MAINOVSKAYA Y. from Kazakhstan with a total score of 56.250 pts follow by DAVLYATOVA Anora from Uzbekistan with 55.850 pts and the surprise of the TAI Olivia from Organizing Country Malaysia with a total of 55.650 pts

Olivia Tai, 15, put up a consistent performance in all four disciplines, namely hoops, ball, ribbon and clubs, to collect 55.650 points in the final.

Yelizaveta Mainovskaya from Kazakhstan was in a class of her own to win the gold with 56.250 points while Anora Davlyatova from Uzbekistan scored 55.850 points for the silver.

“I am delighted to have won the bronze medal against a strong field. All my hard work for the past six months has paid off because my main target was to qualify for the Junior Olympics,” she said.

Tomorrow, Olivia Tai will have another chance to add to her personal medal tally when she performs in three individual apparatus finals, namely hoops, clubs and ribbon.