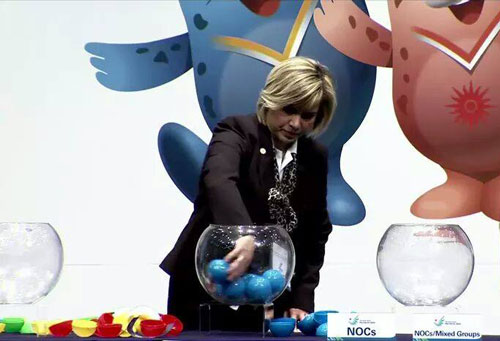 AGU Office: August 21, 2014: Incheon, Korea: The draw for team sports at the 17th Asian Games, Incheon 2014, took place at the Harbor Park Hotel on Thursday. The Draw event made for eight ball sports such as football, basketball, volleyball, handball, rugby, sepaktakraw, waterpolo and kabaddi as well as ten others including badminton and gymnastics.
The Honorary Life Vice President of the OCA, Mr. Wei Jizhong, said the Asian Games had reached the operational phase and that the draw was another major landmark in the countdown to the opening ceremony on September 19.
He thanked Korea, the Korean government, the Korean people and Korean sports circles on behalf of the OCA for hosting the Asian Games for a third time and praised their big contribution to the Olympic Movement in Asia. “With nearly 10,000 athletes and 5,000 officials, the Asian Games is nearly on the same scale as the Olympic Games,” he said.
Mr. Wei appealed for fair play throughout the Asiad, with no doping, NOCs meeting the requirements of the OCA’s eligibility rules, fair judgment of the referees and mutual respect between the athletes and judges and technical officials. “We can show to the world that Asia is in harmony and friendship,” he said. “We are confident that the Incheon Asian Games will be very successful and show to the world the potential power of Asia.”
Over 150 technical delegates, International and Asian sports federation officials, local sports association leaders and organising committee members attended, as well as a huge media presence due largely to the attendance of delegates from the DPR Korea.
Attachment: Gymnastics Start List for the Competition I (Team Finals and Individual Qualifications) 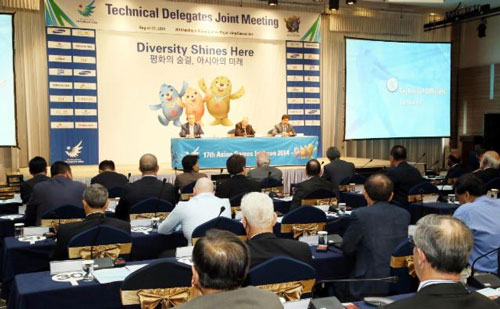