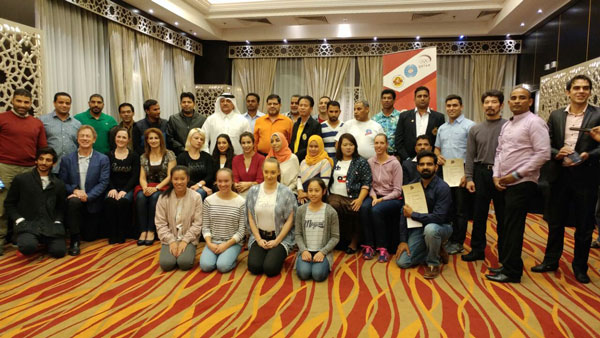 The Gymnastics Federation Qatar hosted a Level 3 FIG Academy for Men’s and Women’s Artistic Gymnastics on December 3-10, 2016.
The Academy was hosted at the wonderful Gymnastics facilities of the Qatar Gymnastics Centre in the capital city of Doha.
Twenty-four eligible coaches participated (11 for WAG and 13 for MAG) from thirteen FIG member federations – Egypt, Indonesia, India, Iran, Jordan, Lebanon, Saudi Arabia, South Africa, Sri Lanka, Syria, Thailand, Ukraine and Yemen. Interestingly, for the very first time, the host country for an Academy did not participate with any coaches.
The participation at this Academy was partially funded by the International Gymnastics Federation through the FIG Development Fund for the Asian Gymnastics Union (AGU). AGU has annually used some portion of the money from the FIG Development Fund to subsidize the attendance of coaches at Academies and that policy has been much appreciated by the federations and coaches and has been enormously successful.
The experts were among the most successful and renowned persons in their fields. The men’s technical lectures were presented by super-coach Takashi Kobayashi of Japan who has also taught frequently for Academies and has in recent years worked with the Japanese men’s national team and served as women’s national coach. Peggy Liddick, the Australian national coach and formerly coach of World Champion Shannon Miller taught the women’s apparatus as well as artistic preparation and choreography. Two professors delivered lectures at an Academy for the first time. Dr. Alexandra Pizzera from the German Sport University in Cologne presented two psychology lectures and Dr. Monem Jemni, now chair of the sport science department a the University of Doha, presented two lectures related to biomechanics. The course leader was Dr. Keith Russell of Canada who is the President of the FIG Scientific Commission and a frequent Academy expert for all disciplines. He taught the remaining sport science lectures related to health and injury prevention.
None of the participating coaches met the stringent special eligibility requirements for the FIG Coaching Brevet.
The participants had to take a two-part theory and practical examination. Almost all of the examination results were good but they did vary from 55% to 86%. The highest result for WAG and for the course overall was by Mai Hamdy of Egypt. Second was another WAG coach, Dima Al-Shar’e of Jordan. The highest MAG result was in third place overall and was tied with two other WAG coaches. These were Himanshu Dave of India, Carin Maxwell of South Africa and Maria Barakat of Jordan.
We thank and congratulate the Qatar Gymnastics Federation and its President Ali Al Hitmi for hosting this event so successfully and are grateful that he visited the Academy every day. A very helpful and enthusiastic staff of helpers assured that all the needs of the participants and experts were met. All of the preliminary correspondence and day-to-day organisation was handled by Anis Saoud, the Qatar Gymnastics Federation Technical Director.
By FIG