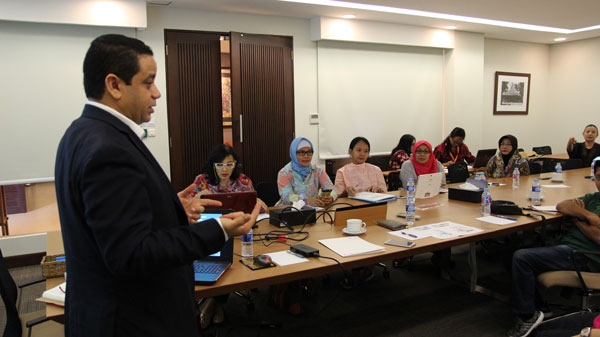 AGU Office: JAKARTA (INA): November 28, 2016: The technical manager of Asian Gymnastics Union (AGU), Anis Saoud provide training day for the Executive Board of the Gymnastics Association of Indonesia (Persani) about the organization of the Asian Games in Jakarta and Palembang in 2018.
“All must be prepared from human resources, the training and the race, the number of volunteers needed, until things technical to wear the type of light what does not disturb the view athletes,” said Anis Saoud in the Building PT Alita Mitra Praya Tanjung Barat, Jakarta , today (27/11).
Ita Yuliati, Gymnastics Competition Manager 2018 Asian Games said Anis Saoud arrival to Jakarta is indeed on its own initiative to provide a complete picture of what it must be prepared both in terms of human resources, match up the necessary equipment and other technical problems.
“Implementation of the Asian Games was the equivalent of an Olympic Games activity, so we have to get information and a full understanding as soon as possible so that it can make budget planning and preparation,” said Ita Yuliati.
Meanwhile Anis reminded to challenge media fields, among others also educate the journalists to understand the type of match and assessment in the field of gymnastics.
“Not that gymnastics is not a global sport but it is complicated and assessment system has not been popular in the community. If soccer in addition to easily calculate the score, the world community also often watching a football game on television, “added Anis.
Challenges ahead Persani have to educate the public through national media so that they also understand that while covering the gymnastics they can follow the match well. For example, photographers cannot use a flash that distract the athletes.
The press should also understand how assessment takes place after the game because they would write in the medium of each so as to provide complete information to the world community because in this digital era of the country reports can be accessed from various parts of the world.
“Later in the 2018 Asian Games we need a Mixed Zone which should be placed by the committee to meet the athletes after receiving a medal with the reporters who had been waiting to interview him,” added Anis.
Mixed Zone is important because each participant country has a team of journalists from the country of origin in the respective foreign and mixed zone that is still up in the arena they can meet with athletes from the country that does not have language difficulties.
He suggested Persani make the Forum Group Discussion (FGD) for both internal organization and to communicate regularly with the press a year before the big event on the Asian Games and regularly explained through a press release that also is ready to make its coverage.
In the sport of gymnastics, Persani and the government should think about the selection of equipment for the Asian Games and after use it only a few days, the equipment should then be stored, treated for use the next 10 years, for example.
“Just talking about storage just have a lot of rules that must be followed so that the laying of the tools does not make the item be damaged so that’s why long preparation had to be done.
By Hilda Ansariah Sabri