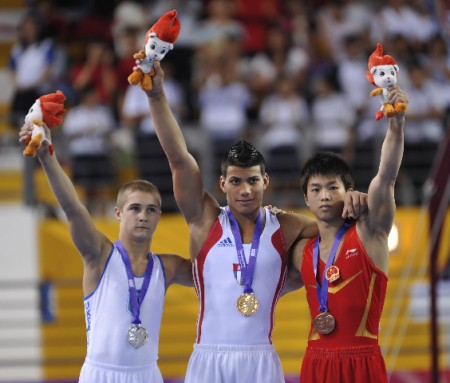 Boys’ Floor Exercise
First up were the boys on Floor, where Ernesto Vila Sarria (CUB), qualified in seventh position, was in for a surprise! The young Cuban topped his qualifying score by .475 points and set the bar high for his competitors (14.575).
Yuya Kamoto, winner of the All-around title and second qualifier on Floor, had a hard start today. He slipped up on his first tumbling pass and finished a disappointing last. Two apparatus were left to turn things around.
Oleg Stepko (UKR) showed amazing speed, power and form in his routine, bettering his qualifying score to 14.500 points and second place behind Ernesto.
Great Britain’s Sam Oldham continued his unfortunate series from the All-around Final, stepping out of bounds and losing precious points. Still waiting for his first medal in Singapore, he finished fifth.
The last competitor was China’s Zhu Xiaodong, Asian Junior Champion on Floor and top qualifier. Zhu had missteps on certain landings and his handstand seemed a bit uneven. 14.300 points and Bronze for him; Zhu had obviously hoped for more, saying that his “target was the Gold.’ ‘I was a little nervous so I didn’t perform to my full potential. I was way too conservative.’
Oleg collected his second Silver from these Games and Ernesto ran off with the Gold.
‘I’m so happy to get the Gold,’ said Vila Sarria, who believes that his win will help other gymnasts from his country. ‘There are some fellow Cubans going for the Pan American Games. I hope this will give them inspiration and strength.’
After Ana Sofia Gomez Porres of Guatemala, who impressed with her 5th place in the All-around competition, Ernesto is the next junior gymnast from an emerging Central American country to shine on the international scene. That’s great news!

Girls’ Vault
Top qualifier and All-around Champion Viktoria Komova of Russia lost points in Execution as compared to her previous vaults, but she clinched an excellent 15.321 point score, leaving a considerable margin between herself and the rest of the field.
Spaniard Maria Vargas was next to surprise spectators. Qualified in fourth place, Maria improved the Execution score of her first vault significantly with a very smooth, easy looking performance worth 13.800. Her result was awarded with Silver.
‘I’m very excited and happy,’ said Vargas. ‘I had hoped to be third and I didn’t expect to win a Silver medal. I performed much better than in Qualifications.’
History repeated itself in this Final, when Carlotta Ferlito (ITA) took the Bronze (13.700), leaving Natsumi of Japan in fourth place (13.662); just like in the All-around competition. 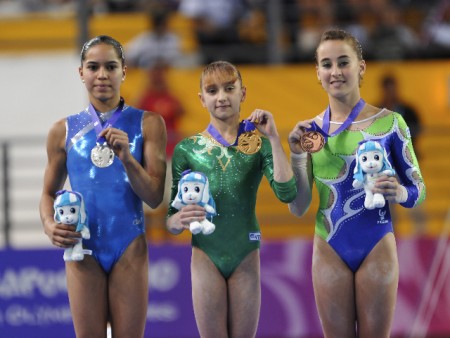 Pommel Horse
Oleg and Sam were in for a nip and tuck race on Pommel Horse last night. They qualified in rank one and two, and had been equally eager to win the Gold. Both showed excellent performances that truly animated the crowd. In the end Oleg was a nose ahead (13.950), winning the title.
‘I have no words; at last a Gold medal after two Silver medals,’ said the young Ukrainian, who finished second in both the All-around and Floor Exercise competitions. ‘I can’t really explain what I’m feeling right now, I’m overwhelmed.’
Sam settled for Silver with a score of 13.925. ‘It was my first medal here, so it really took some pressure off my mind,’ he said.
A safe performance, judged 13.550 points, won Russia’s Daniil Kazachkov the Bronze. 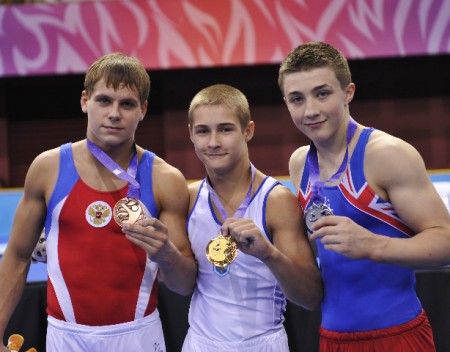 Uneven Bars
Viktora continued her medal rush, claiming her third Gold at these Games on Uneven Bars with a total of 14.525. ‘I’m happy with what I’ve got but I wanted to do a bit better,” she said referring to a mistake in which her legs brushed against the ground as she was jumping bars.
China’s Tan Sixin, who is the reigning Asian Junior Champion on this apparatus, came in second today with 14.125 points.
Not showing too many complex skills, but with the highest Execution score of the whole field (8.450), Swede Jonna Alderteg made her home country proud, taking off the Bronze with a total of 13.550 points.
‘I’m just so happy right now, I can’t believe it. I qualified seventh and improved enough to finish with a medal,” Jonna commented.
Romanian Diana Bulimar, third in preliminaries, did not perform well last night; with a lack of both Difficulty and Execution she finished in seventh (12.525). 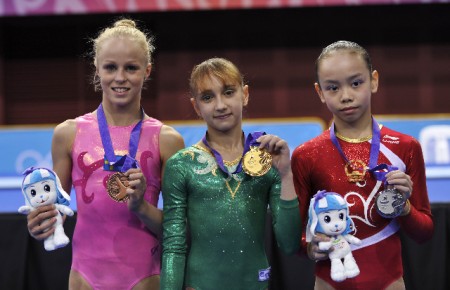 Rings
Dominating in Qualifications, Romanian Andrei Muntean seemed a little less confident last night. However, Andrei’s 14.350 was good enough to win him the Gold on his favourite apparatus. ‘I don’t have any words to describe my feelings right now. This is the happiest day of my life,’ he said.
He outscored Yuya, who qualified second, and was back in the game after he found himself on the lower ranks on Floor and Pommel Horse. The All-around Champion added a Silver to his record (14.200).
Zhu was third in the preliminaries and wanted to go for a medal in this Final. His routine scored high on Difficulty but Zhu seemed to become more and more tired and lose concentration. His execution was not as clean as we had seen it before and he was forced to accept seventh place (13.775).
Nestor Abad of Spain was the happy Bronze medallists. This came as a bit of a surprise to everyone, but with an improved Execution score by .1 as compared to Qualifications, the third place was well-deserved. Nestor scored a total of 14.150.
‘This has been a very nice experience,’ Abad said. ‘It feels as though I was at the real Olympics. Now all I have to do is make it there.’ 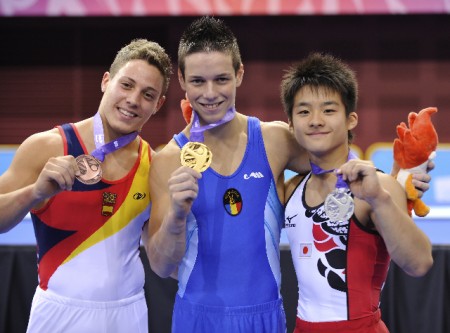