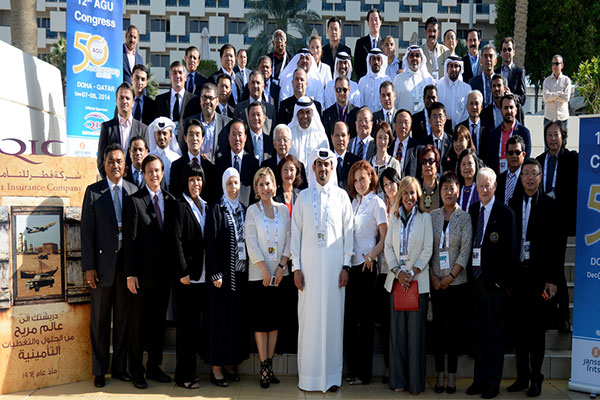 Doha (QAT) AGU Office: December 12, 2014: AGU organized the 12th AGU Congress in Doha (QAT) during the period 06-08 December 2014.
The Presidential Commission meeting organized on December 06, 2014, which is the first step to prepare the General Assembly. The Presidential Commission propose the following decisions and approvals:
1 – Proposal of the Formation of the Voting office for submitting to the EC for Approval:
2 – The commission decided to appoint Mr. Painda Malik to replace the President during his absent in the AGU Congress.
3. Proposal of suspension both Afghanistan and Maldives for not paying the AGU membership fees for not paying the AGU membership Feeds.
4. Submit the request to change Kyrgyzstan Federation from West Zone to the Central South Asian Zone to follow the IOC distribution.
5. Suggest signing a cooperation agreement with the African Gymnastics Union (UAG).
6. – Suggest establishing The AGU Foundation, which aims to help and support the National Federation in various fields. In addition, suggest forming a management commission for this foundation.

The General Assembly organized on December 08, 2014 with the presence of Delegates from 27 Affiliated Federations such as CHN; HKG; JPN; KAZ; KOR; MGL; PRK; TPE; MAC; MAS; PHI; SIN; THA; BAN; IND; NEP; PAK; SRI; UZB; IRI; JOR; KSA; KUW; YEM; SYR; IRQ; QAT; LIB and YEM. In addition, the presence of Turkmenistan for the first time who requested their admission to be AGU affiliated country.
The General Assembly Meeting start with the welcome message by the AGU President Mr. A-Rahman Al-SHATHRI and then the welcome message by the President of Qatar Gymnastics Federation (QGF) Mr. Ali Al-HITMI the host federation of this congress.

Mr. A-Rahman Al-SHATHRI start the meeting with memorial of Mr. Sawat Sopa AGU Vice-President and Ex-President of Thailand Gymnastics Federation and Mr. Asep Sulaeman Ex- Secretary General of Indonesian Gymnastics Federation since 2011 and AGU Executive Committee Member during the period April 2007 until Mars 2011.
On behalf of AGU authorities and the Asian gymnastics community, the AGU offers its most sincere condolences to the family and friends of both of them.

Then Mr. Al-SHATHRI mention that AGU commemorated the 50th Anniversary this year 2014. The AGU founded in October 1964 At the Olympic Games in Tokyo; JPN, KOR, CHN and PHI proposed a meeting and approved gymnastics to be official event at the Asian Games. At that time, AGU started as ASIAN GYMNASTIC FEDERATION (AGF). The first congress held in Tokyo in June 1966 and Mr. Yoshihiko KURIMOTO (JPN) become the first President of AGU followed by five Presidents as below:

It is time to celebrate the 50th Anniversary of the foundation of AGU
2014 is a turning point for the AGU at the statutory level, since the 12th AGU Congress in Doha gives the opportunity to AGU to renew its authorities. An election is a big step; it is an individual commitment to the common cause. Once elected, a candidate ceases to represent his or her federation, becoming rather an ambassador for an entire community. In order to exist and grow, it is imperative that our Federation rally its expertise and energy under a single banner: “Gymnastics”.
AGU has 37 member federations with seven disciplines on all continent. The AGU’s Mission Statement is to “DEVELOP, PROMOTE and COORDINATE the SPORT OF GYMNASTICS in the whole of Asia”
Mr. Al-SHATHRI mention about the great success had achieved during the past two years, this comes after the huge efforts and the accurate plans had figured at the beginning of AGU duties. The AGU Development Project was Brilliant and successful with regard to organisation and the number of participants.
He add that we are fortunate to have a number of talented coaches, judges and gymnasts involved in our program of the AGU Development Project. And we welcome the opportunity to share our knowledge with other countries that are working to develop their programs and Gymnasts, that is why we had the idea to have an agreement with UAG (African Gymnastics Union) to share with them our experience because such continent need a help to develop themselves.

During the last two years, AGU organized the following events:

After that, the GA unanimously approved the admission of Gymnastics Federation of Turkmenistan (TKM); TKM join the Central South Zone.
Then the GA accept to change KYRGYZSTAN Gymnastics Federation from the West Asian Zone to the central south Zone which is normal since geographically KYRGYZSTAN is in the central south according to the OCA Map.
Finally, GA approved the suspension for non-payment of the AGU Membership fees of AFGHANISTAN and MALDIVES Federations.

The General Assembly start the election of the new AGU Authorities starting from the position of the President which Mr. A-Rahman Al-SHATHRI is the only candidate to this position and received the vote of all the presented delegates. Then we continue with the election of all the EC, the Technical Committees, and the Gymnastic for All committee (Attachment all the Results).

AGU gives a big importance to the sports science and AGU organized until now four Scientific Symposiums. For that, we create a scientific commission, coordinated by Dr. Monem Jemni who gave a summary about our activities.

The Technical Manager of AGU Mr. Anis SAOUD present the allocation of the next AGU events 2015 – 2016 (you can find the calendar attached).

Then Mr. Thierry Deleuze Product Manager of Janssen-Fritsen Company gave a summary about their sponsorship with AGU during last 8 years and the opportunity to continue to support the affiliated federations in need.

We are fortunate to have a number of talented coaches, judges and gymnasts involved in our program of the AGU Development Project.
We welcome the opportunity to share our knowledge with other countries that are working to develop their programs and Gymnasts; that is why we had the idea to have an agreement with UAG (African Gymnastics Union) to share with them our experience; because such continent need a help to develop himself. That is why we asked UAG to have an official agreement to help them to develop gymnastics in Africa.
Africa have potential coaches and gymnasts but they need our help to raise their technical level.

AGU President Mr. Al-Shathri had the idea to create an AGU Foundation.
The idea is to collect aid by some federations who can participate every year with an amount that they decide to cooperate with; to have annual budget to use it for the help the federations in need. For that, AGU will create to committee to make rules and directives for how we can spend this money.