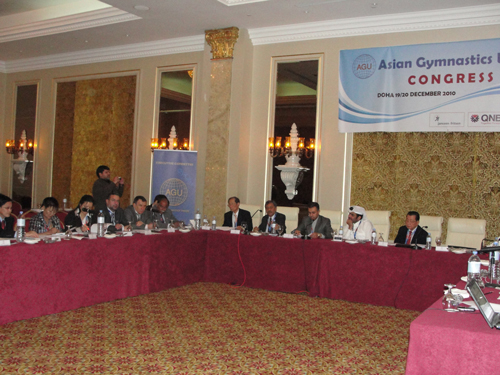 AGU Office, Doha (QAT) December 20, 2010: Convened around their President Mr. A-Rahman Al-Sharthri (QAT), FIG Executive Committee Members (EC) opened with a promising day. In his opening, the President refereed to the work done during the last period and he fill that AGU follow up his achievement and he is very happy that AGU had achieved the success that we wanted it.
You can find below the Summary of the decisions made by the Executive Committee at its meeting in Doha (QAT), on December 19, 2010
The Executive unanimously approved the following:
The 2010 accounts.
– Approval of the 2 years plan.
– Approval of the financial statement and the report from the auditor
– The budget for the year 2011
– Recommend to the General Assembly the Suspension of Cambodian Gymnastics Federation for not respecting their financial obligation towards the AGU.
– The program of the AGU development project for the year 2011 as the following: