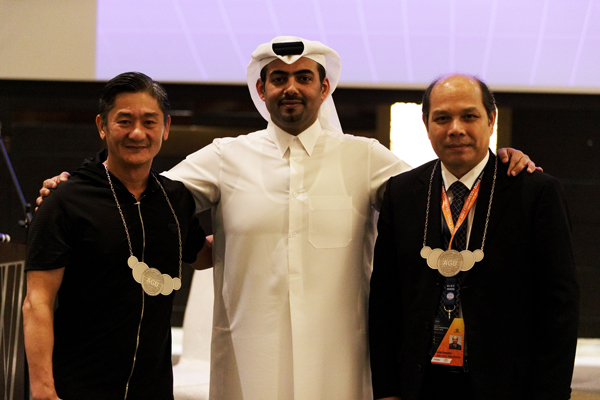 DOHA (QAT) AGU Office: The two-day 20th Congress of the Asian Gymnastics Union (AGU) concluded here at the Westin Hotel last week with around 70 delegates from different affiliated federations participated at the biennial Congress.
The Congress also elected its new AGU body for the next four-year term.
“AGU’s leadership is committed to excellence, to showcasing the best of gymnasts, and the Olympic values besides having a pool of technical experts, who are the backbone of the sport’s future,” AGU President Abdulrahman Al Shathri told www.agu-gymnastics.com.
Mr Al Shathri was elected unopposed for yet another term while several candidates had filed nominations for various posts and portfolios including the four zonal vice-presidents, seven technical committee presidents and members.
“The interest shown by the various candidates from AGU-affiliated federations clearly showed that the Asian body has grown in importance and stature,” added Mr Al Shathri.
FIG President Mr Morinari Watanabe, who attended the Congress as AGU guest, conveyed his best wishes to AGU.
“The Gymnastics family keeps on growing and the Asian Gymnastics Union is one of the continental unions contributing most strongly to this development.
Only a few years ago, the AGU relied, first and foremost, on a handful of members such as China, Japan, Korea and several former Soviet republics with firm traditions in the sport.
Since then, this base has been enriched by several new and highly active federations and today, with 35 affiliated national associations, the AGU has become Gymnastics’ second most important continental union. This development is matched by a wider representation in the ruling bodies of world Gymnastics,” said Watanabe.