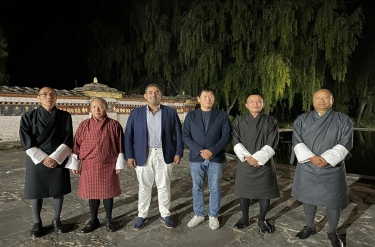 Bhutan, September 7, 2022. The Secretary General of Bhutan Olympic Committee, Mr. Tshering SONAM KARMA, welcomed the move to establish a gymnastics federation in the Kingdom of Bhutan. Stressing the prince’s desire to establish a gymnastics federation, which is one of the foundations of the Olympic pyramid. On the other hand, the President of the Asian Federation, Mr. Abdul Rahman Al-Shathri, praised the role played by the Secretary-General of the Committee in terms of hospitality and cooperation in running the affairs of the new federation. “The visit was positive and crowned with success, as we will soon see a gymnastics federation in the Kingdom of Bhutan, and we are proud to have it as an active part of the AGU family,” added Al-Shathri