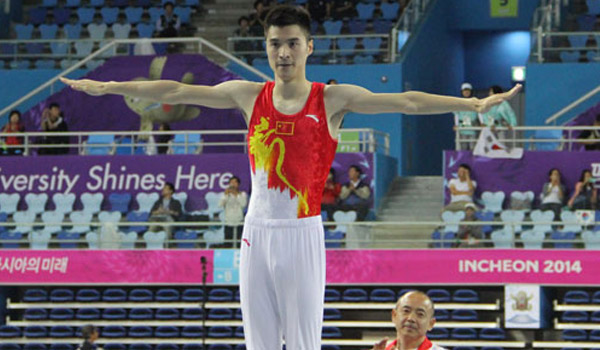 AGU Office: November 10, 2014: After the Asian Games hold in Incheon (KOR) during September 26, 2014 The Chinese Tu managed to have revenge on Dong and win his first Individual World title
Tu, the 2013 World Trampoline silver medallist, capitalized on his final routine in Daytona, and following six World golds won with the Chinese team and his Synchro partner Dong Dong.
As usual, it was reigning World and Olympic champion Dong going head to head with Tu in finals after both hit their routines in Sunday afternoon’s Men’s Semifinal, which whittled the top 24 competitors from the qualification round to eight finalists. Qualification leader Gao Lei (CHN), one of the early title favorites, bounced out after three elements, leaving Dong and Tu as the two Chinese men to advance to the final in first and second place, respectively.
There, it was Tu who finally prevailed, posting 61.875 over Dong’s 60.890, based on a 0.2 higher difficulty score as well as better execution (26.100 to Tu compared to 25.200 for Dong), though Dong had a slightly better Time of Flight.
“I am very, very happy,” said Tu, who took a sort of victory lap of the arena following the final scores and was still grinning half an hour later. “After a long time of waiting and striving, luck has come to me. We have a Chinese saying: Good things sometimes come late.”
Nineteen-year-old Uladzislau Hancharou (BLR) climbed from 14th after the qualification round to win bronze in the final with an excellent routine a full two points higher in difficulty than the one he showed in qualifications. Japan’s Masaki Ito, 2012 Olympic silver medallist Dmitry Ushakov and Georgia’s Tengizi Koshkadze also showed excellent routines to finish fourth, fifth and sixth, respectively.
Women’s Synchronised Trampoline
China’s Liu Lingling, the breakout star of this World Championships following her surprise win in the Women’s Individual competition Saturday night, added another gold medal, this time with Synchro partner Li Meng.
Liu and Li qualified to the one-per-country final ahead of more experienced pair Li Dan and Zhong Xingping, both World medallists in Individual Trampoline in 2013, but it was Canadian pair Rosie MacLennan and Samantha Sendel who were the surprise of the qualification round, bouncing an excellent tandem routine to take first place going into the final. The duo had had limited training time due to concussion symptoms sustained by Sendel two weeks ago, and the Ontario native did not feel well enough to compete in the Women’s Individual portion of the Championships.
Although eventually outbouced by the Chinese, the Canadians delivered another subperb routine in the final to take the silver, tied with Tatsiana Piatrenia and Hanna Harchonak (BLR). It was the second medal of the competition for Harchonak, who won bronze in the Women’s Individual final.
“I feel happy,” said Liu, who is competing in her second World Championships in Daytona and celebrated her 20th birthday Satruday. “The first time I was nervous, but this time I feel more familiar with everything.”
Men’s Tumbling
After a mistake left him out of the final at last year’s World Championships, 2011 Men’s World Tumbling champion Yang Song (CHN) returned with new determination to take back his title. Another mistake — this time from reigning World champion Kristof Willerton on his first run in finals (crashed triple back tuck) — gave Yang the opportunity he needed: After two catlike landings on his triple back somersault and Miller (triple twisting double layout) dismounts on both his passes, the title was once again his.
“In 2013 I was very disappointed, so I’m happy to come back and give a good performance,” Yang said after the competition. “I was very confident with my passes. In training, I thought I had a good chance eto do well, which helped my confidence.”
The Men’s Tumbling final was a show of guts, with numerous gymnasts attempting triple somersaults and Millers (triple twisting double layouts). Perhaps gutsiest of all was silver medallist Alexander Mironov (RUS), who earned his prize by possibly becoming the first man to show a Miller through to a second Miller in his last pass. Though his second skill lacked a bit of height, Mironov was able to pull it around, much to the delight of the audience.
2009 World Tumbling champion Tagir Murtazaev earned bronze after having to improvise slightly to save his last pass but was able to land cleanly, earning himself the bronze after five years without a medal in his event at Worlds.
Women’s Double Mini-trampoline
With reigning World champion Kristle Lowell out of the competition with an injury, reigning U.S. champion Erin Jauch, stepped up to win the U.S.’s long gold medal on home soil at this World Championships.
Jauch kept cool and calm in a mistake-filled final, where four of the eight competitors either didn’t compete one of their two passes or landed their second element on the double mini and not on the mat.
Britain’s Jasmin Short followed suit, sticking her first pass cold to take an early lead and executing an excellent second run for silver. With an unusual first pass, Russia’s Polina Troianova, an admirer of the style and technique of now-retired former World champion Svetlana Balandina, was thrilled to follow in Balandina’s footsteps with bronze.
“My first pass wasn’t as great as I expected it to be and as I wanted it to be, so I was like, oh, I’ve got to work a little harder for the next one. And it turned out fine,” said Jauch, who is coached by her mother in Illinois. “And it turned out fine.”