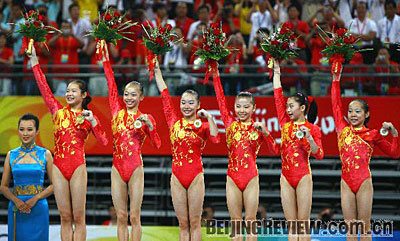 ROTTERDAM (NED), AGU Office, October 20, 2010: Anxiously awaited by fans, the first medal event of the 42nd Artistic Gymnastics World Championships Rotterdam (NED), October 16 – 24, 2010 in Ahoy Arena tonight, featuring the world’s eight best women’s teams in the Final.
Top qualifier Russia prevailed over their competitors in the action-packed Women’s Team Final, garnering a total of 175.397 and narrowly outscoring the USA in second (175.196). China won Bronze with 174.781 points.
As opposed to the Team Qualifications that follow the 6-5-4 system, allowing each country to line up six gymnasts per apparatus, out of whom five actually compete with their best four scores making up the team’s total, the Finals follow the 6-3-3 system. This means the teams line up six gymnasts, but only three competitors perform in each event and all scores count.
Russia had qualified in first position, leading with a narrow margin over the teams of China and the USA. The riveting question tonight was whether or not the Russians could sustain the pressure and keep up with the excellent performance they put on during the preliminaries when they prevailed over the former Olympic and World Champions. One thing was certain; it would be a close battle for medals!
Also interesting to follow were teams from Romania, Beijing Olympic and 2007 World Bronze medallists, who qualified in fourth position here, as well as Japan. The latter, hosts of the 2011 Worlds in Tokyo, secured the last spot for this Final on rank eight, failing to show their full potential. They were aiming to better this result tonight.
The teams of Australia, Great Britain and Italy completed tonight’s line-up.
The USA, third in qualifying, improved their scores on Vault and strong Rebecca Bross impressed on Beam and Floor. Bridget Sloan performed on Uneven Bars only, where she scored 14.566, and Mackenzie Caquattro showed solid consistency. Alicia Sacramone had a wake-up call on Beam when she slightly slipped, but she managed to maintain her footing on the apparatus. Alexandra Raisman equalled out her deficit on Beam with a solid Floor routine. Mattie Larson, however, the team’s hope on Floor, struggled on her sole apparatus tonight, falling on her knees after her last acro pass. The team started on Uneven Bars and lay in third rank after rotation three.
China started off well on Vault, but the team then faced unusual problems on their stand out events, Uneven Bars and Balance Beam. Jiang Yuyan fell from the bars and Huang Qiushuang stopped on her kip on the lower bar. Every competitor saw a loss in points from the preliminaries on Beam, with Sui Lu dropping down to 13.000 after falling off the apparatus at her first acro pass. On the bright side, Olympic and World Champion He Kexin performed her Uneven Bars routine to perfection and all three starters on Floor (Huang Qiushuang, Sui Lu and Huang Qiushuang) hit their routines. However, with Beijing finalist Cheng Fei missing from the game, the team lacked a big shot on Floor; and with their lowest score being 14.000 in this event, they lost the lead they had after rotation three.
Having garnered an impressive number of individual World and Olympic titles as well as Team Silver at the 1996 and 2000 Olympics and the 1997 Worlds, Russia had been lacking a Team title up to now. As top qualifier, they were eager to prove their consistency tonight and take home the title.
But it was a tough battle to the top of the podium. Starting in the Olympic Order, the Russians showed even performances on Vault, but with Tatiana Nabieva and Anna Dementyeva failing on Uneven Bars, the team dropped into third position after this rotation. Their All-around stand out, Aliya Mustafina, leader of the Individual Qualifications, shone on Uneven Bars and Balance Beam, and collected valuable points for a team that had fallen behind. This was not Anna Dementyeva’s best day; she struggled at her dismount from Beam, but the team redeemed themselves on Floor, their last event, when Ksenia Afanasyeva took the cake with 14.800.
When Mustafina took to the floor as tonight’s last competitor, the USA were leading the rankings with China in second. It all came down to her routine. With nerves of steel, the first year senior did not disappoint her team, and while she stepped out of bounds at the end of her routine, her 14.666 was enough to place Russia on top!
Good times for Romania, in fourth place, with Ana Porgras as the top scorer on Beam (15.066) and Diana Maria Chelaru third on Floor (14.733); following was Australia’s Lauren Mitchell (14.700), whose team finished sixth.
Beth Tweddle shone for Great Britain on Uneven Bars (15.733) and Floor (14.666), but the team was unable to rank higher than seventh today.
With the solid performances of All-arounders Koko Tsurumi and Rie Tanaka, Japan gladly took an upward move to fifth rank.
Italy, qualified in seventh, ranked at the bottom of the table.