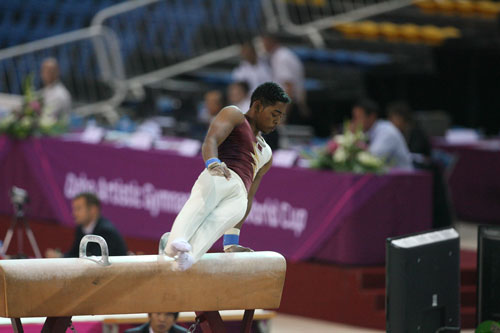 March 19, 2010: From March 22 – 24, Doha (QAT) will host a stage on the Men’s and Women’s Artistic World Cup Circuit for the third consecutive year. A FIG-label category A event, this stopover is on its way to becoming a don’t-miss event on the international circuit and a stage of reference for the Gulf region. The Qatari Gymnastics Federation and its President Mr Ali Al-Hitmi, also a FIG Council Member, have proven their competency and expertise by single-handedly catapulting their tournament to vie with the discipline’s hottest competitions in just three editions.
What a line-up!
The 2010 tournament is going to sizzle. 24 federations have registered, with the Asian Gymnastics Union presenting strong to the delight of its President Abdulrahman Alshathri (QAT), one of many initiators toward gymnastic development in Asia and, more specifically, the Middle East.
5 Asian Federations will participate to this event: China, Japan, Malaysia, India and Qatar. Libanon withdraw in last minute because of the injury of the gymnast.
At the top, flying men Epke Zonderland (NED), Silver Medallist in London last year, and Aljaz Pegan (SLO), 2005 World Champion in Melbourne and multiple World Cup Champion, will be at the Horizontal Bar. Doha fans will get a chance to put faces to names as new talent try their hand at qualifying for a world championship event, or with a bit of luck the Olympic Games. In addition, Doha provides a platform for local gymnasts to get in front of the camera’s lens and step up to the international scene.
Check out the entry lists for MAG and WAG!
A look at the programme
The competitions will unfold at the magnificent Aspire Academy Dome, supplied by Dutch apparatus manufacturer Janssen & Fritsen and with television coverage by Al-Jazeera Sport.
Delegations will arrive March 20 and 21 for the qualifying rounds on the 22nd. Finals will be held March 23 and 24.
For more information click here