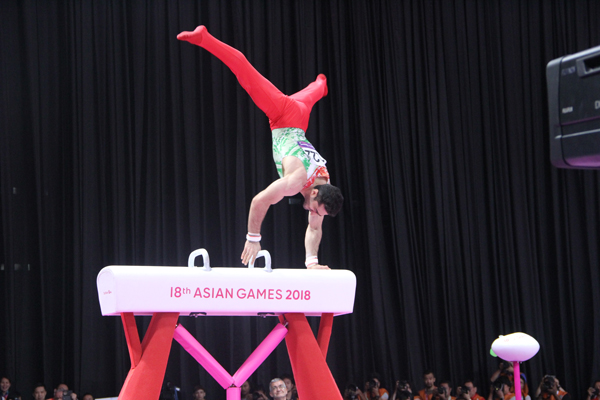 AGU Media, DOHA (QAT): Some good news for Asia and Iran when the international gymnastics federation’s (FIG) men’s technical committee approved three new Pommel Horse elements after Iran’s Saeedreza Keikha, who last year became the first gymnast from his country to have a skill named for him in the Code of Points (Keikha 2).

Named Keikha 3, Keikha 4 and Keikha 5, the Iranian performed the first two successfully for the value in the qualification of the 2018 Apparatus World Cup in Baku, Azerbaijan.

While the third one he achieved at the 2018 World Challenge Cup in Mersin, Turkey, in July.

Keikha 2, with a side support with half spindle with both pommels between the hands (flair or circle), was successfully performed at the Islamic Solidarity Games in May, 2017, in Baku, Azerbaijan.

“I’m glad that I had performed three new elements. I was pleased with my performance,” Keikha had said in a recent interview.

The Iranian claimed a silver medal at the 2017 Toyota International Gymnastics Competition in December.