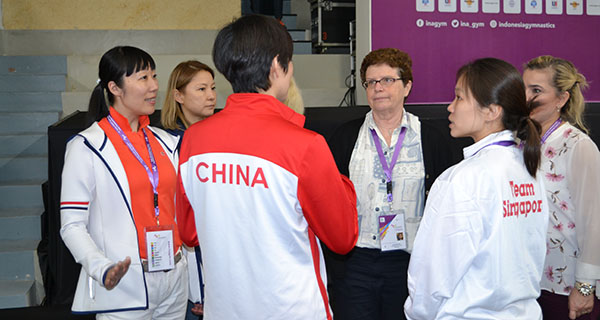 “The sport is a part of culture in China and Japan. Others will have to spend a lot of time on the development to be able to rise to that level,” Sacchi told www.agu-gymnastics.com here on Tuesday.
Gymnastics is more of a culture and tradition in China and Japan, which boasts of some of the world’s best.

But the likes Kohei Uchimura wasn’t discovered overnight in Japan as it needed a sustained development programme and government support which has yielded positive results.

But south Asian nations Afghanistan, Bhutan, Pakistan and Nepal have not entered into the four-day competition here.

India, Bangladesh and Sri Lanka will feature in the tournament, but Sacchi pointed out the chalk and cheese difference between them and others.

Even the sport in the south-east nations Malaysia, Singapore and Indonesia needs encouragement.

“The quality is not up to the mark. Most of them need to work hard. It’s not advisable to sit back and complain. Their respective federations need to produce results and only then their governments can chip in with financial support,” added Sacchi.

However, the Italian, who is popularly known in the fraternity by her first name, has a word of caution for China despite their domination in the world.

“Chinese economy has witnessed a big boom in the last one decade. Most people are now wealthy and hence the parents don’t want their kids to take up the sport. Most children aren’t so keen to join the sport and there’re less gymnasts now,” said the 58-year-old.

China has had an unimpressive campaign at 2016 Rio Olympics, but they revived their glory and pride a bit at the 2017 World Championships in Montreal, Canada, when Xiao Ruoteng succeeded Kohei Uchimura, who missed the tournament due to injury, as the All-Around world champion.

“The 2020 Olympics is a big motivation for Japan. They’ve invested huge on the sport and their gymnasts have done well in recent years, but let’s wait and watch,” said Sacchi.