Doha (QAT) AGU Office, October 10, 2014: Japan’s Kohei Uchimura won his fifth straight World all-around title in Nanning, China, on Thursday, adding to a trophy case that rivals and perhaps trumps the greatest gymnasts of all time.
Uchimura, also the 2012 Olympic all-around champion, was the only gymnast to score at least 15 points on all six apparatuses for the fourth straight Worlds. He totaled 91.965 points. He is the only male or female gymnast to win more than three World all-around titles.
“I have never thought the competition is getting any easier,” Uchimura said. “The competition is simply a reflection of my daily training, so I think that what I am trying to do is consider how I can put my best training results into my competition performances in a perfect manner.”
Great Britain’s Max Whitlock won silver, 1.492 behind. Whitlock didn’t originally qualify for the all-around final but got in the field when another British gymnast pulled out.
Japan’s Yusuke Tanaka won bronze. Uchimura has shared the World all-around podium with a different teammate each of the last three Worlds.
Americans Sam Mikulak and Donnell Whittenburg were 12th and 17th, respectively.
Mikulak fell on parallel bars and was out of bounds on his vault. The London Olympian and two-time P&G Championships all-around winner was second in all-around qualifying in 2013 and in position for a medal going into the final rotation last year before a high bar mistake.
Russia’s David Belyavskiy finished fifth on Thursday and was asked what it will take to beat Uchimura.
“As yet we do not have an answer to that question,” he said. “If we knew how to do it we would to it.”
Uchimura is 25 years old. The three Olympic all-around champions in 2000, 2004 and 2008, before Uchimura began his reign, were 24, 21 and 28 years old. Uchimura would be right in the middle of his prime, based off those statistics.
Many say Uchimura is already the greatest gymnast of all time.
“Compared with the title, the best gymnast in the world, what I’m care about is that I can deliver a good performance to win the championship that convinced all the people, including myself,” Uchimura said. “That would be the happiest thing for me.”
Uchimura said last year that Belarus’ Vitaly Scherbo is the greatest.
Scherbo is the only gymnast to win six gold medals at a single Olympics, doing so at the 1992 Barcelona Games for the Unified Team.
Scherbo owns 10 career Olympic medals and 23 career World Championship medals. Uchimura is well behind with five Olympic medals and 15 Worlds medals.
Uchimura can chip away and pass Scherbo, though, given he has said he wants to compete through the Tokyo 2020 Olympics. One thing Scherbo could not accomplish was to win multiple Olympic all-around titles, which no man has done since 1972. Uchimura clearly looks like a favorite to successfully defend his London 2012 title in Rio in two years.
Uchimura has one event left in Nanning, the high bar final Sunday. 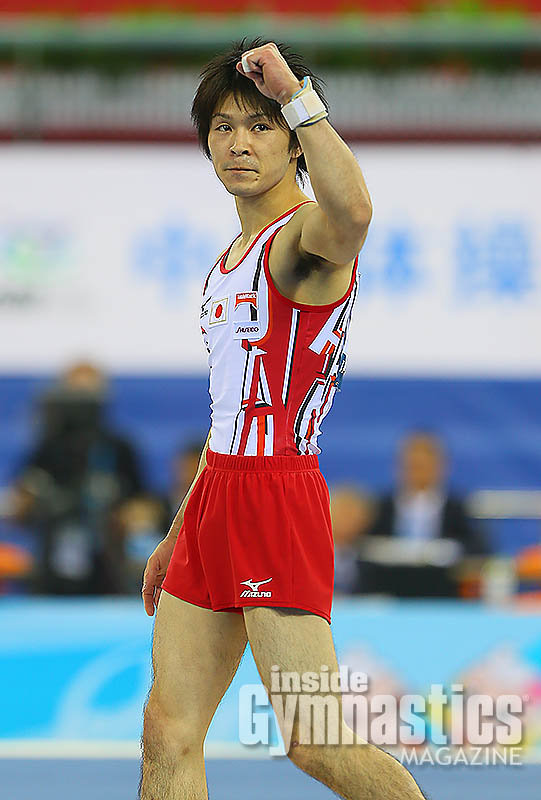