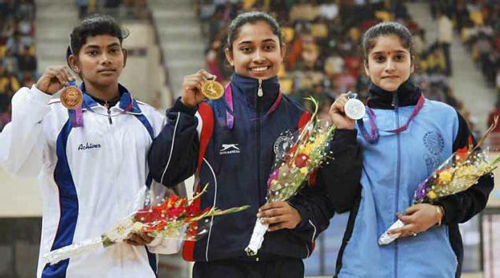 After setting a record by bagging five golds in the 34th National Games in Jharkhand, Tripura girl Dipa Karmakar now dreams of becoming the best gymnast in Asia.
“If I get suitable equipments, I can easily beat Asian girls including those of China and Japan,” said Dipa confidently on  arriving here late Tuesday evening after setting a record in the National Games.
The 17-year-old gymnast made her maiden appearance in the National Games and showed efficiency and fluency in vault, uneven bars, beam and floor exercises – on her way to five golds, including the overall crown.
Thrilled by the huge reception at airport, Dipa told reporters: “Tripura has a tradition to achieve success in the gymnasts. If the Tripura boys and girls get appropriate coaching, equipments and scope, they will do well even at the international events.”
“The credit for my success goes to my coach Bisweshwar Nandi. I have dedicated all my medals to him,” said Dipa, who also represented India in the Guangzhou Asian Games and the Commonwealth Games in New Delhi last year.
“Sunday was my life’s best moment when I became the allround individual champion in my first appearance in the National Games.”
Nandi, a former international gymnast, has coached Dipa since she was a child and feels she can go far with adequate support.
“I have always told everybody that Dipa has huge talent and skill and can do wonders in gymnastics if she gets adequate support,” said Nandi, a ten-time national champion.
The Tripura government, the Tripura Gymnastic Association, the Tripura Olympic Association and other sports organisations are now busy giving a huge formal reception to Dipa next month after her higher secondary examination, which begins Feb 28.
Deepa’s father and Sports Authority of India (SAI)’s weightlifting coach Dulal Karmakar said: “Tripura always has done well in India for gymnastics. On earlier occasions, several Tripura gymnasts had received medals in the national and international events.”
The proud father claimed that his daughter is determined to be one among the top gymnasts in the sub-continent.
He, however, felt that proper and modern equipment, similar to those used in China, Japan and Korea, were seriously needed to achieve the target.
Tripura Chief Minister Manik Sarkar also met the golden girl and wished her success in future.
“We would extend allout support to you in the 2012 Olympics. After your performance in the Asian Games and at the Commonwealth Games, we hope you would do better in the next edition,” Sarkar was quoted by an official as saying to Dipa.