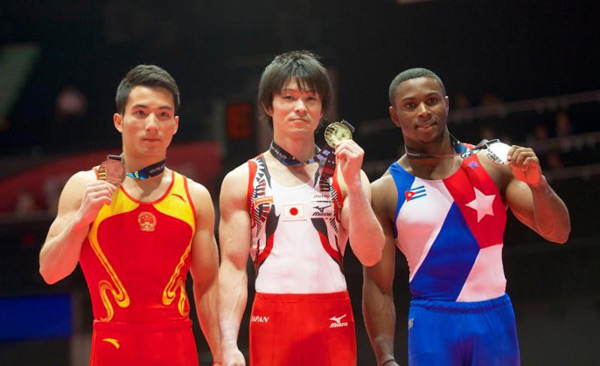 Doha (QAT), AGU Office, October 30, 2015: Since being crowned World champion for the first time in 2009, no one has been able to impede the royal march of Kohei Uchimura. Nobody did Friday night in Glasgow either, as the Japanese gymnast many call the greatest ever won his sixth consecutive World All-around title. Including the Olympic title he won in 2012, Uchimura has now dominated World competition for seven straight years.
Liberated by the Japanese men’s victory in the team competition for the first time in 37 years Wednesday night, Uchimura sailed through the Men’s All-around final, smiling and pumping his fists after each hit routine. Overall, he accumulated 92.332 points, a comfortable 1.634 ahead of the rest of the pack.
With his unique mix of power, elegance, fluidity and catlike stuck landings on his dismounts, Uchimura at times seemed to come close to the thing he seeks above all: perfection. With his high-flying performance on High Bar — and stuck landing on his dismount — he broke his own record for consecutive wins at Worlds. Normally reserved, he acknowledged the occasion by counting to six with his fingers in front of the camera.
“Throughout the competition I felt very strong emotions,” Uchimura said. “I have not been thinking about the number of medals. I just thought about the quality of my performance. In competition, I think about how I can move the audience with my gymnastics.”
In the same manner that he crushed the competition in the runup to the London Olympics, the 26-year-old has dominated the pre-Rio cycle. If all continues to go well, he will arrive in Brazil nine months from now the favorite to defend the Olympic title he won in 2012.
Uchimura already has 18 World medals, including nine gold. But before he can start thinking about another Olympics, there is still a small business matter to attend to: the High Bar final, to be held Sunday afternoon in Glasgow.

Manrique Larduet, the Cuban surprise
After several years’ absence, Cuba made a big return to the World stage with the talented Manrique Larduet. Just 19 years old and with few international competitions under his belt, Larduet proved himself stronger than every other gymnast save Uchimura Friday night. In clinching the silver, the powerful Larduet showed the form and sangfroid of a champion, calmly hitting every routine. If anything, the Pan American Games silver medallist was too powerful — during his Floor routine, he seemed to be landing on a trampoline. With a stronger exercise on Pommel Horse, he might have challenged Uchimura more. “I am really proud to represent my country and to be with these amazing gymnasts,” Larduet said. “I’m also really proud to win this medal for my country.” Fourteen years after Cuba’s first World medals in Men’s Gymnastics, the country has a new star.

China’s Deng pops in for bronze
If Larduet’s silver was unexpected, so too was Deng Shudi’s bronze, which made him the first Chinese man to mount the podium in World All-around competition since 2007. Though solid everywhere, Deng was spectacular only on Parallel Bars, where he attained the second highest score of any competitor. In a competition where steadiness over six pieces serves a gymnast better than flash on a few, the fact that Deng didn’t fall and others did helped him clinch a medal when all was said and done. “I have made my aims come true,” said Deng, who also won bronze with the Chinese team. “But I still have a lot of work to do in order to increase my skills. We want to have better results in the team finals.”

For Verniaiev and Whitlock, disappointment
Much to the disappointment of the pro-British crowd that had hoped to see one of their gymnasts mount the podium again, 2014 World silver medallist Max Whitlock took himself out of contention with a fall from the High Bar on his penultimate event. Billed as the only man with the potential to knock Uchimura from the top place on the podium, a stumble on Floor and a fall on Pommel Horse put Oleg Verniaiev in a deep hole from the beginning. The pressure off, the Ukrainian seemed to relax and delivered good scores everywhere else, particularly on Parallel Bars, where he will defend his World title this weekend. Verniaiev ended fourth, Whitlock fifth.
FIG Media