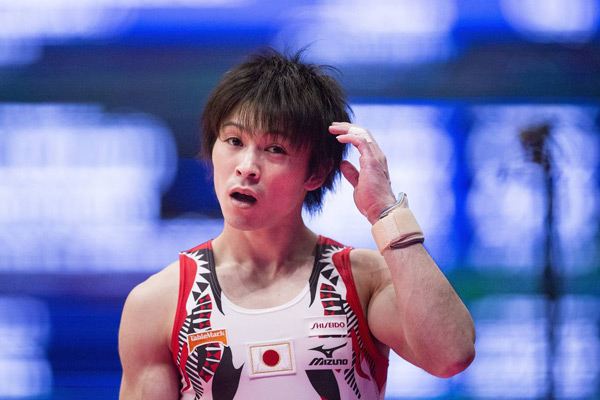 After silver at four straight World Championships — including a 0.1 heartbreaker last year in Nanning — the Japanese men finally reversed their fortunes to take gold Wednesday night in Glasgow.
Team gold for the first time since 1978 is the realisation of a dream for star Kohei Uchimura, who contributed heavily to his team’s victory, scoring 91.531 of Japan’s 270.818 points. The gymnast many believe is the best who ever lived has already won the past five consecutive World All-around titles in his own right but said before the competition that he would rather win gold with his team than a sixth consecutive individual title. The heavy favorite for Friday’s Men’s All-around final, he may well get to have both.
The anticipated Japan-China team showdown never materialized. Guided by master twister Kenzo Shirai, who slayed the competition on Floor with his quadruple twist, Japan distanced themselves by 2.7 points from the beginning and had extended their lead to 6.3 over China by the halfway point of the competition.
But falls from Yusuke Tanaka and Uchimura on the High Bar in the final rotation brought the team brutally back down to earth. By a margin of less than half a point, they held on following a late charge from Great Britain, which finished their competition on a high note on Floor before an adoring public.
“I would have liked to have had a perfect competition, so I feel bad about my fall on High Bar,” said Uchimura. “As the last competitor, I wanted to perfect all the way through.”
Still, after nearly four decades of waiting for a World title, Uchimura, Tanaka, Ryohei Kato, Kazuma Kaya, Kenzo Shirai and Naoto Hayasaka are guaranteed to return to Japan as heroes of the archipelago. If nothing else, they have made their mothers, who watched the competition waving Japanese flags from the stands, very proud.

China’s fall from grace
For the Chinese, 12 years of domination at the World level came to an end Wednesday night. From the beginning, Lin Chaopan, Deng Shudi, Zhang Chenglong, Xiao Ruoteng, Liu Yang and You Hao looked less precise than usual. China never held the lead, getting lost in the classification early before rebounding to take bronze on the strength of strong performances on Parallel Bars and High Bar. To challenge for the title, however, it was too little, too late. Less than a year before the Rio Olympics, the Chinese have accomplished little other than signalling to the rest of the world that their Olympic title is by no means assured. “China has a great history in gymnastics. For us, this is a warning,” said Zhang Chenglong. “We didn’t win this year, but we know that we are still one of the strongest nations.”