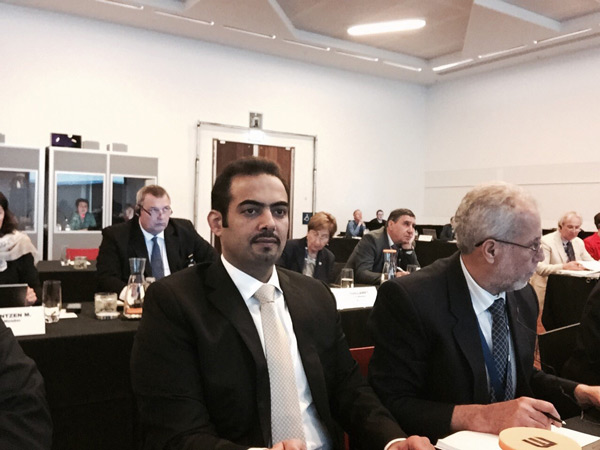 Melbourne (AUS), AGU Office, May 17, 2015: AGU President Mr. A-Rahman Al-SHATHRI assist the FIG meetings in Melbourne (AUS) which included the Executive Committee meeting during May 13-14, 2015; then The council meeting during May 15-16, 2015 and finally the development commission on May 17, 2015.
The following persons presented Asian continent during these meetings:
Mr. Morinari WATANABE (JPN); Mr. LUO Chaoyi (CHN); Mr. Dae Won KIM (KOR); Mr. Ali Al-HITMI (QAT); Mr. Ali Al-JEFRI (KSA) and Mr. Mohamed MAKKI (LIB).
The most important points discussed during these meetings:
– Upon request of the Japanese Gymnastics Federation, the EC agreed to change the dates of the 2016 Congress in Tokyo (JPN). The electoral Congress will be held 18-20 October 2016.
– The EC discussed new competition formats for the 2018 Youth Olympic Games in Buenos Aires (ARG).
– The EC postponed the planned EC meeting from October 2015 to 6-8 December 2015. At this meeting, the Technical Committees will have to present the Code of Points 2017-2020 for approval.
– The Council unanimously approved all changes of the Technical Regulations proposed by the FIG Executive Committee, including:
– The introduction of tiebreaking rules in all disciplines at the World Games
– Harmonization of definitions and various kinds of disqualification and “zero” exercises between the Olympic Games and World Championships
– Revised rights of the affiliated Federations to send judges to the World Championships.
– The Council also approved with an overwhelming majority the principles of the new qualification system and competition calendar for the Tokyo 2020 Olympic Games. Under the approved system, the number of gymnasts in the team competition will be reduced from five gymnasts to four, opening up 24 extra spaces for male and female gymnasts at the Olympic Games. Up to two gymnasts from countries already qualified for the team competition would be eligible to compete as All-Around gymnasts or on their specialists based on a qualification system that includes results from the Continental Championships, World Cup and World Challenge Cups.
– The Council has unanimously approved the new qualification system for Trampoline Gymnastics for the 2020 Olympic Games in Tokyo.
– The Council has assigned the 2019 Artistic Gymnastics World Championships to Stuttgart (GER)
– The Council has chosen Bangkok (THA) as host of the May 2016 FIG Council meeting.

The development commission meeting held in May 17, 2015 with the presence of the President of AGU Mr. A-Rahman Al-SHATHRI accompanied with the Technical Manager Mr. Anis SAOUD and Mr. Ali AlHITMI (QAT) as a member of the commission.
The meeting was president by Mrs. Slava CORNE (FIG Vice-President) with the presence of Mr. Bruno GRANDI (FIG President) and three presidents of the continents (PAGU – UAG and UEG). The most important point discussed was to establish an age group program, which can be used by the continents and the federations during their championships and training camps.