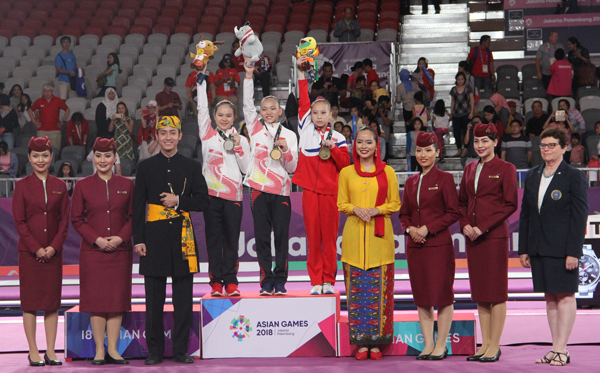 JAKARTA, Indonesia: China’s emerging star Chen Yile won her country’s 12th straight All-Around women’s event at the Asian Games here on Tuesday, a day after Lin Chaopan and Xiao Ruoteng won gold and bronze respectively in men’s All-Around competition on Monday.
China seemed to have worked on their past mistakes especially after the 2014 Rio Olympic Games debacle.
In fact, the federation’s positive to reshape and restructure its gymnastics squad can be gauged from their gymnasts’ performances here.
Though Japan has sent their second-batch, yet that won’t belittle China’s outstanding show in the competition.
The 16-year-old, who debuted at the Asiad, was in sparkling form in routines of high difficulty and execution scores. She ranked first in both balanced beam and floor exercise among all four rotations, pocketing the gold with 55.950 points in total and sailing into finals of the two other apparatuses.
“I have to work hard for the FIG World Championships in Doha this year. That’s the real game where you compete against the best,” said Chen.
Chen’s team-mate Luo Huan won the silver (54.550) and qualified for the uneven bars final by finishing second among 43 athletes.
Kim Su Jong of the Democratic People’s Republic of Korea earned 53.600 points for the bronze.
It was not an easy task for Chen, youngest in the Chinese squad, to reach the top particularly against the Koreans.
“If Chen want to thrive at the World Championships and 2020 Tokyo Games, she has to improve her skills on vault and must prepare a more difficult routine,” said Chinese team manager Ye Zhennan. “We are here to gain more experiences from international competitions.”
China’s Liu Tingting qualified for the uneven bars final while team-mate Zhang Jin secured a berth in beam final.
According to the artistic gymnastics competition rules at the Games, qualifications for team and apparatus finals, and individual All-Around finals have been merged into one single competition.
In the women’s team event, China topped the chart followed by DPRK, South Korea, Japan, Chinese Taipei, Malaysia, India and Indonesia.