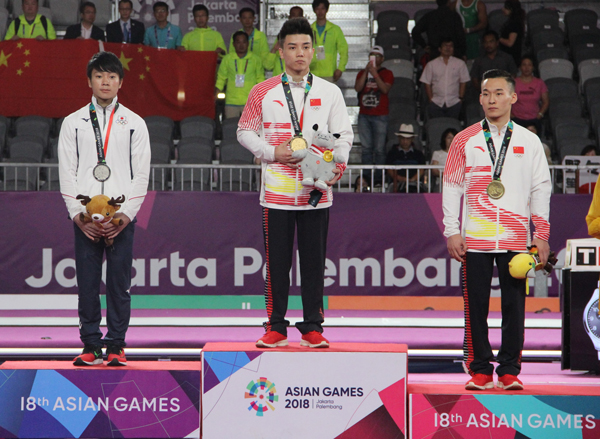 JAKARTA, Indonesia: It was a predictable start by the Chinese men as they dominated the gymnastics competition at the Asian Games with Lin Chaopan winning his country’s first gold from the event in the All-Around finals at the Jakarta International Expo here on Monday.
Lin’s effort of 86.750 points fetched him the gold followed by Japan’s Shogo Nonomura (85.950).
But world all-around champion Xiao Ruoteng’s bronze-medal finish was a big disappointment for the 22-year-old, who won the world title in Montreal, Canada, last year.
Xiao, a gold-medal hopeful and who will be defending world crown in Doha at the 48th FIG Artistic World Championships in October, garnered 85.550 points in his Asian Games debut.
Lin proved very strong in parallel bars, high bar, pommel horse and vault, which helped him to outshine his compatriot.
Xiao, who was taking the lead in the first three rotations, however, failed to finish a handstand on pommel horse in time, which sent him down the rankings.
The Chinese team submitted an enquiry to judges and Xiao’s score was then raised to 13.900 from 13.200 points, which was still not good enough to bring him back to the top.
According to the competition rules at the Asian Games, qualifications for team, apparatus and individual all-around finals have been merged into one single competition.
Eight teams qualified into the finals with China leading the pack followed Japan, South Korea, Chinese Taipei, Vietnam, Kazakhstan, Uzbekistan and Iran.
Meanwhile, Japan did not send their top gymnasts here as they are preparing for the Doha Worlds, which starts in October to early November at the Aspire Dome.
Filipino talent
Philippines’ Carlos Edriel Yulo caught the attention on the big stage when he topped the floor qualifications with 14.500 points. His next executions helped him pip several proven performers including Xiao and Nonomura, who came fifth and sixth respectively.
The 18-year-old also made it to the vault finals and, if he manages to win a medal, it will boost his confidence.
Coached by Munehiro Kugimiya, Yulo had been consistent at the international competitions by winning silver in floor at the FIG World Cups in Doha (2017&2018).