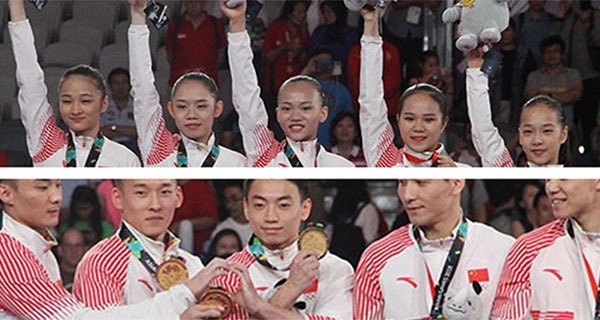 JAKARTA, Indonesia: China bagged both the men and women’s gymnastics team titles at the Asian Games here on Wednesday.

The fabulous five in the men’s competition claimed the country’s third straight gymnastics gold in as many days shortly before their women’s team made it four.

China, who are trying to rebuild their structure after the 2014 Rio Games debacle, was in for a shock when Japan’s latest talent Kakeru Tanigawa almost guided his country to the top at the top following his near-faultless high-speed vault.

But China’s world All-Around champion Xiao Ruoteng turned the tables on their nearest challengers on the horizontal bar, which was the final performance of the event.

However, the Chinese men weren’t satisfied since Japan had sent a young squad as top stars Kohei Uchimura and Kenzo Shirai are busy in their preparation for the FIG World Championships this October in Qatar.

“It doesn’t prove we are the best because Japan did not come with their best gymnasts,” said Lin Chaopan, who secured the men’s All-Around gold on Monday.

Qiao Liang, who recently joined the team as head coach, was greeted by the gymnasts after the event’s last apparatus – floor exercise.

Qiao, a former US gymnastics coach, was mobbed by the five women — which included individual all-around gold medallist Chen Yile — after the victory ceremony, each one placing their medals around his neck.