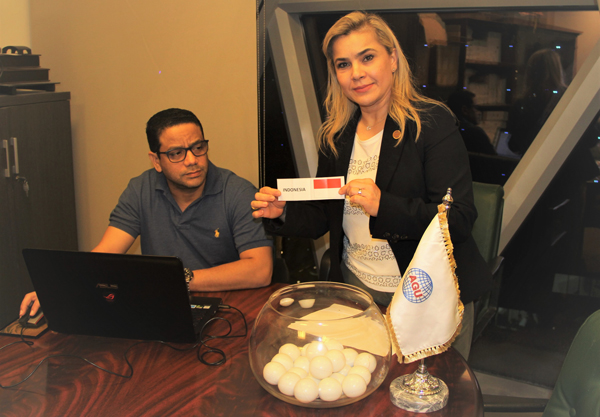 Doha (Qatar), AGU Office: The draw of lots for the 15th Junior Artistic Asian Championships was held here last Sunday in the presence of Asian Gymnastics Union Technical Manager Anis Saoud and President of AGU WAG Technical Committee Rima Kizilgun.
The tournament, which is also a qualifying event for Youth Olympic Games in Buenos Aires, Argentina, will be held in Jakarta, Indonesia, from April 25-28.
A total of 22 countries including Bangladesh, India, Singapore, Qatar, China, Indonesia, Iran and Japan among others have been divided into three groups — Sub-Division I, II and III.
The qualification rounds will be held in two days, which will include six apparatus for MAG and four for WAG.
Mongolia, Iran, India, Sri Lanka, Indonesia and a Mixed Group of Chinese Taipei and Thailand are in MAG Sub-Division I.
Strong contenders Japan and China are clubbed with Malaysia, Kazakhstan, Vietnam and a Mixed Group I team of the Philippines, Syria and Iraq in Sub-Division II.
Meanwhile, Qatar find themselves in a strong group (Sub-Division II) which also has Korea, Uzbekistan, Bangladesh, Singapore and Turkmenistan.
In the WAG competition, India, Mongolia, Uzbekistan and Japanese girls are in Sub-Division I while Singapore, Sri Lanka, China, Indonesia comprise Sub-Division II teams.
A Mixed Group team of Qatar-Thailand-Turkmenistan-Vietnam, Malaysia, Korea, Kazakhstan comprise Sub-Division III.
“The juniors will have the experience of competing in an international tournament. It will be a good exposure for them,” said Competition Director Ita Yuliati.
The championships, which is also a test event for this year’s Asian Games, is divided into different age categories for boys (14 and 17) and girls (13 to 15).
“Gymnastics is not a popular sport in Indonesia, but by hosting the event give us the opportunity to popularise it and involve more people before the Asian Games in August,” said Indonesian Gymnastics Association Chairwoman Ilya Avianti.