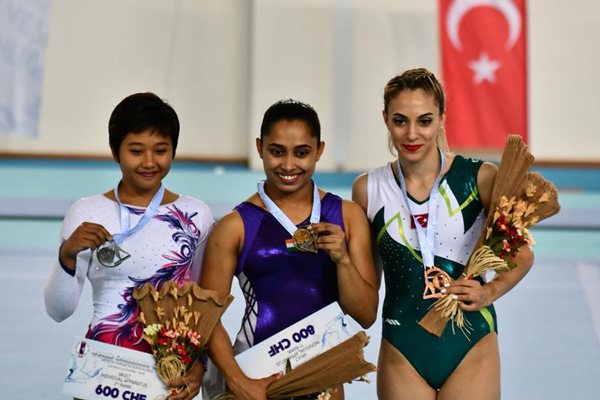 Doha (Qatar), AGU Office: More than a year after her surgery and a brief lay off from the sport, India’s Dipa Karmakar showed that she still hasn’t lost the spirit and energy.

Recently, Karmarkar, who came fourth at the 2016 Olympics, notched up a score of 14.150 to win vault gold at the FIG Artistic Gymnastics World Challenge Cup in Mercin, Turkey, recently.

There had been lot of speculations on her career after she had returned from Rio Games in 2016, but a niggling Anterior Cruciate Ligament (ACL) injury followed by a surgery last year in April almost threatened her return.

Her performance at the international competition will not only boost her confidence but also bolster her chances at the Asian Games in Indonesia next month.

Karmakar, who has not taken part at a competitive event since then, topped the qualification chart with 13.400 points.

“I had to go through rehabilitation for nearly nine months last month. I couldn’t practice any routines. I was clear about one thing. When I go to my next competition, I would not go as a tourist nor would I be satisfied by reaching the final,” she told Indian media.

Karmakar’s score was significantly below her mark at the Olympics (15.066), but this event was all about giving her some training opportunities before the continental Games.

Given her experience, everybody expects her to win a gold, but it remains to be seen how Karmakar performs at the Games, which will be held in Jakarta and Palembang.