Draw of Lot of the 3rd AER Asian Championships Indonesia 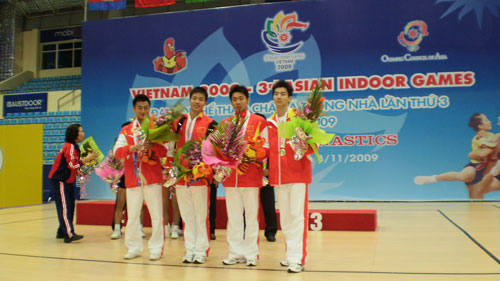 Doha (QAT): AGU Office October 10, 2012: The draw of lot of the 3rd AER Asian Championships that will held in Palembang in Indonesia during the period from 17 to 21 October 2012 was held during the AGU Congress witch held in Tashkent – Uzbekistan under the direction of the President of Aerobic Technical Committee Mrs. Tammy Yagi-Kitagawa; Mr. Mohamed Saed – AGU Secretary General and Mr. Yudi Utomo AGU EC Member and member of the organising committee of the event.
The results of the draw of lot is in the attached files and a copy in the latest file of the website.
The event will be organised according to the following schedule:

Oct 16, 2012:  Arrival
Oct 17, 2012:  Orientation Meeting
Opening Rehearsals
Judges’ Panel Training
Judges’ Meeting
Podium Training
Welcome Party
Oct 18, 2012:  Judges’ Drawing, Qualifications AG1, Podium Training Senior
Oct 19, 2012:  Final AG1, Qualifications Senior
Oct 20, 2012:  Final Senior, Farewell Party
Oct 21, 2012:  City Tour (Optional) – Departure
Oct 22, 2012:  Departure
The Event Manager will be: Mr. Dhennie Zainal
The training and the competition will be organized in the Sport & Convention Center Palembang (read: PSCC) is a real revitalization of Srivijaya gymnasium with a touch of futuristic, dynamic and modern.  Historic gymnasium area of 25.028 m2 was inaugurated by President Soeharto, 40 years ago.  Renovation PSCC is one of the government’s vision of Palembang in South Sumatra who want to host a successful event class sport SEA Games XXVI in the month of November 2011.  PSCC first achievement was the successful holding of sports competitions Asian Men’s Volleyball Championship 2011 which was followed by professional clubs from 12 countries in Asia.  Physical quality of buildings and structures PSCC was praised by many parties.  Some government officials named PSCC as a sports arena no.  1 in Indonesia and the best volley ball court in Indonesia.
PSCC that carries the tagline Urban City Hall is the current best venues in Palembang.  PSCC is designed to accommodate a variety of events of national and international standards such as:
* Sports competition PSCC provides a form of arena concerts to hold center stage as a concert tour live performance, theater, orchestra, recitals, festivals and supported by a team of professional audio visual equipment.

Draw of Lot of the 3rd AER Asian Championships Indonesia