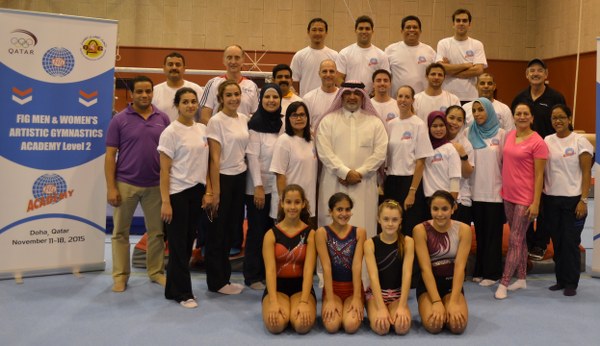 Doha (QAT) AGU Office, November 26, 2015: During the week of November 11 and 18, 2015, the Gymnastics Federation of Qatar hosted a Level 2 Academy for Men’s and Women’s Artistic Gymnastics. It was the fifth time that Qatar has hosted an FIG Academy and followed immediately after a Level 2 Academy for men in Saudi Arabia. This Academy was hosted in the new Qatar Gymnastics Center in the capital city of Doha.

Eighteen coaches attended the Academy from ten different federations – Egypt, France, Indonesia, India, Iran, Jordan, Lebanon, Philippines, South Africa and Yemen. In addition, a coach from Palestine attended full time as an observer. Uniquely, this was the first time in 212 Academies that the host federation did not register any of its own citizens. Qatar has many foreign coaches working within its borders and many of them attended instead. Eight of the coaches were there for men’s Gymnastics and ten for women.
The course leader was Chris Evans (right) of Great Britain who is an osteopath and Women’s Artistic Gymnastics coach and has served as FIG expert at numerous Academies. He taught all of the theory lectures. Joining him for the practical lectures was Rick McCharles (left) of Canada. Rick is a well-known and enthusiastic Gymnastics educator and coaching blogger. He has served as a FIG expert at many Age Group Training Camps in the past year. Both Chris and Rick travelled directly from the Academy that finished in Riyadh, Saudi Arabia only one day earlier. They were joined by frequent Academy and Age Group expert, Lilia Ortiz Lopéz of Mexico. She taught all of the women’s apparatus as well as choreography and music lectures.

The examination results the two-part examination that includes a theory examination and a practical examination involving the teaching of a Men’s or Women’s Artistic Gymnastics skill. Ranged greatly from 50% to 93%. The highest result for men and for the course overall was achieved by Cyril Zamora of France. The second and third highest results both went to women’s Gymnastics coaches – Maria Barakat of Jordan and Anna Francesca Cruz of the Philippines respectively.

The quality of the organisation and facility was excellent. Most of the organisational work and advance preparation was handled by Anis Saoud the Qatar gymnastics High Performance Manager. Thanks and congratulations go to the Qatar Gymnastics Federation and its President Ali Al-Hitmi and his team of workers, translators and gymnasts for organising such a successful FIG Academy.