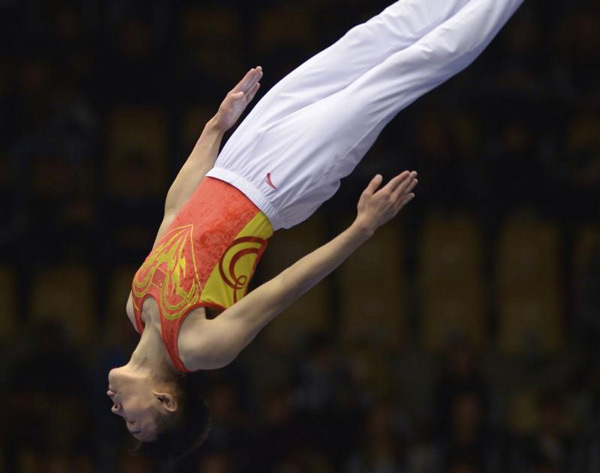 Trampoline
Gao Lei smokes the competition, starting with his teammates
With nine months before the start of the Rio Olympic Games, Trampoline has found a new prince in Gao Lei. The 23-year-old Chinese gymnast, who until now has lived in the shadow of teammates Dong Dong, the 2012 Olympic champion, and Tu Xiao, the reigning World champion, took his first World individual title Sunday, asserting himself as the Olympic favorite.
With levels of talent deeper than a Trampoline bed, a gymnast like Gao first needs to defeat their own teammates before being permitted to take on the world. In advancing to the medal round, Gao had already won a major victory by eclipsing Dong, and Tu in the preliminary rounds. In finals, the Shanghai native nailed an exercise that included six triple saltos to grab the gold.
In exchanging his bronze from 2014 for silver this year, Uladzislau Hancharou (BLR) affirmed his position as a challenger for the 2016 Olympic crown. Hancharou, who turns 20 December 2, finished a few thousandths of a point ahead of bronze medallist Andrey Yudin. The battle for the podium was tight, with Japan’s Masaki Ito, fourth, and 2012 Olympic silver medallist Dmitry Ushakov (RUS) fifth, both less than half a point behind Hancharou.

Li Dan returns to the top
China’s Li Dan has survived the ups and downs of a long international career and is once again World champion, five years after her taking first and only World individual title in 2010. The 27-year-old withstood the pressure of competing last in the Women’s final, delivering a magnificent routine worthy of her immense talent, something she has not always done in major international competition. Li’s dainty and difficult exercise was enough to overtake her teammate, 2014 World champion Liu Lingling, who performed a less difficult but no less eye-catching routine. Fourth in 2014, 34-year-old Tatsiana Piatrenia displaced 2012 Olympic champion Rosie MacLennan (CAN) to win bronze, her first-ever individual World medal after a dozen years on the international circuit.

Hard times for China’s Olympic champions
Neither 2012 Olympic gold medallist Dong Dong nor 2008 champion He Wenna advanced past the semifinal round of Sunday’s competition, a shock for Dong, who has stood on the podium at every World Championships and Olympic Games since 2007. The most successful gymnast since the legendary Olympic champion Alexander Moskalenko (RUS) was cast back down to earth by superior performances from younger teammates, who advanced to the two-per-country final in front of him. He for her part failed to finish her routine after hitting the padding surrounding the Trampoline.

First countries qualify for the Rio Olympic Games
China, Russia and Japan each earned the right to send two gymnasts to Rio to compete in Men’s Individual Trampoline, while Belarus and France each earned one spot as the first Olympic berths were allocated Sunday in Odense. In the Women’s competition, China, Belarus and Great Britain each won two places for their gymnasts at the Games.
Several other countries will battle for the final Olympic berths at the Pre-Olympic Test Event, to be held April 20 in Rio. In all, 16 men and 16 women will compete in Trampoline at the Games. (See the list of qualifiers here)

Yang Song, the Tumbling Prince of Denmark
Already crowned World champion in 2011 and 2014, Yang Song (CHN) was the man to beat this year as well after dominating the qualification round. Unfazed by the pressure of a three-peat, Yang remained untouchable in a final in which three World champions were represented among the eight competitors. His flipping, twisting tumbling lines lifted him above the competition, while his teammate Zhang Kuo earned bronze. After helping his team win gold Saturday night, Russia’s Timofei Podust earned himself an individual silver, sandwiched between the two Chinese.

Double Mini-trampoline: Erin Jauch doubles down on World titles
If that was indeed Erin Jauch’s final routine at a World Championships, it was a great way to go out. The reigning World champion, who has been contemplating retirement, stuck her double layout full out second pass to earn her second consecutive World title in Women’s Double Mini-trampoline. Silver and bronze medallists Jasmin Short (GBR) and Lina Sjoberg (SWE) contributed to the stick party in finals as well, with Sjoberg, a former Artistic elite gymnast, earning Sweden its first-ever World medal in Women’s Double Mini.