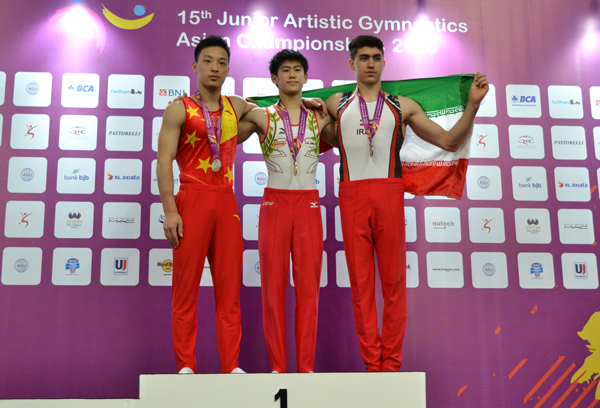 JAKARTA, Indonesia: Iran surprised everyone including heavyweights China and Japan by winning a medal in the men’s pommel horse at the 15th Artistic Asian Junior Championships at Istora Senayan on Friday.

“I’m happy to win a medal here. It’s a big achievement for me and my country,” Reza told www.agu-gymnastics.com.

Despite the third-place finish, it was an outstanding achievement for the youngster given the fact that he competed against two Chinese, and as many Japanese and Kazakhstan contenders.

Compatriot Armin Vatankhah fourth-place finish also gave the Iranians a reason to celebrate as he finished ahead of Japan’s Oka Shinnosuke and China’s Yin Dehang, who came seventh.

The performance here will boost Reza’s confidence, but he also needs to work hard to maintain his level.

“Reza joined the sport when he was six. He’s very passionate about gymnastics,” said team’s physiotherapist Masud Judi, who handed his country’s national flag to him on the podium.